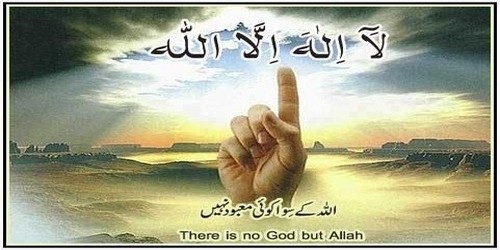 Power of the Word “There Is No God but Allah”

The firm word, la illaha illa Allah (There is no god but Allah) anchor humanity firmly in the life of this world and in the hereafter.

A hard state of affairs stood in the face of the Prophet of Islam, peace be upon him; the existing state of the Arabian Peninsula, of the whole earth

It was overcome with flawed, deeply-rooted beliefs, concepts, values, standards, systems, and laws of life.

A long history, overlapping interests, and diverse powers backed this established state of affairs, which stood as a barrier in the face of Islam.

Islam is not satisfied with only changing beliefs, goals, manners, feelings, values, principles, and customs, but insists on changing regimes, laws, systems, status quo, distribution of wealth, and acting for the good of the earth. It also insists on grasping away the leadership of humanity from the hands of false gods and handing it back to Allah and Islam.

Truly, the gap between Islam the day it came and the people was abysmal, and the spiritual uplift it wanted to provide was a long way from where they were.

With what power was he, peace be upon him, able to stand alone in the face of all the chiefs of Quraysh and their body of beliefs, laws, and interests, and then to change all this and establish the new system?

He did not compliment their beliefs and ideologies. He did not flatter their feelings and thoughts. He did not make peace with their idols and masters. He did not soften in his position or allow any compromises.

He did not dazzle them with a claim of secret power, or superhuman qualities, or mystic sources
Rather, he was commanded to tell them right from the first days, while still in Makkah, where all forces were rallying and conspiring against him:

He not only declared his religion and worship to be completely separate from theirs, stressing an absolute disunity devoid of any chance of ever meeting, but was also commanded to make them despair of any future prospect of agreeing, repeating to them: “Nor will I be a worshiper of what you worship.” He persisted in stressing absolute separation in this matter, without any possibility of their beliefs converging: “For you is your religion, and for me is my religion.”

He did not dazzle them with a claim of secret power, or superhuman qualities, or mystic sources; rather, he was commanded to tell them:

{Say (O Muhammad), ‘I possess no power of benefit or harm to myself except as Allah wills. If I had the knowledge of the Unseen, I should have secured for myself an abundance of wealth, and no evil should have touched me. I am but a warner, and a bringer of glad tidings unto people who believe.’} (Al-A‘raf 7: 188)

A Messenger from God

Nor did he position himself as the intermediary between the worshipers and their Lord through whom worship, prayers, supplications, and sacrifices are offered. Or a bestower of blessings and forgiveness, sitting to hear people lay bare their faults and sins and then administering sacraments of penance, for: {Who can forgive sins except Allah?} (Al-‘Imran 3: 135)

His mission was just to show the way for each individual to personally call upon the Lord of existence, praying directly to Him alone:

{It is You we worship and You we ask for help. Guide us to the Straight Path. The Path of those upon whom You have bestowed Your Grace, not (the path) of those who have earned Your Anger, nor of those who have gone astray.} (Al-Fatihah 1: 5-7)

The Prophet said, “The matter belongs to Allah. He places it wherever (with whom) He likes.”
Finally, he did not distribute promises of special titles, authority, or riches to those who may choose to follow him when he triumphed over his opponents; rather, they would just be believers, just be Muslims. Ibn Ishaq said:

The Prophet, peace be upon him, used to present himself to the tribes during the Hajj season, saying, “O people of so-and-so! I am the Messenger of Allah to you, Who commands that you worship Allah and associate nothing with Him; that you cast off the rivals (false idols) you worship instead of (or besides) Him; and that you believe in me, affirm your faith in me, and protect me until I clarify on behalf of Allah what (the Message) He sent me with.”

He presented himself to the tribe of Amir ibn Sa‘sa‘ah and called them to believe in Allah. A man among them, named Bahirah bin Firas, said, “By Allah, if I take this youth from Quraysh, I will master the Arabs by him.”

Then he said, “Tell me, if we pledge allegiance to you regarding your matter, then Allah grants you victory over those who oppose you, will the matter be ours after you?”

The Prophet said, “The matter belongs to Allah. He places it wherever (with whom) He likes.”

Bahirah replied, “Will our chests be aimed at by the Arabs for your sake, then when Allah grants you victory the matter goes to other than us? We have no need of your matter.” And they rejected him. ((Ibn Hisham, As-Sirah An-Nabawiyyah)

This is simply the work of the invincible power of truth: {Truth has come and falsehood has vanished. Surely, falsehood is ever bound to vanish.} (Al-Isra’ 17: 81)

This is simply the work of the invincible power of the true word la illah illa Allah (There is no god but Allah) that Prophet Muhammad cried out, which naturally makes its way into the human soul with an awakening stimulus to the human Fitrah (pure inborn nature), calling it back to its Creator after straying and error. For the word and meaning are ingrained by the Maker into the soul’s very being. It innately knows and accepts no other God than Him as innately as it knows to breathe.

It is the good word, la illaha illa Allah (There is no god but Allah) the branches of which reach heaven and yields continual blessings and benefits.

{A good word is as a good tree, whose root is firmly fixed, and its branches (high) in the sky. It gives its fruit at all times, by the Leave of its Lord. And Allah sets forth parables for mankind in order that they may remember.} (Ibrahim 14: 24-25)

It is the firm word, la illah illa Allah (There is no god but Allah) the roots of which anchor humanity firmly in the life of this world and in the hereafter.

{Allah keeps firm those who believe, with the Firm Word, in worldly life and in the hereafter.} (Ibrahim 14: 27)