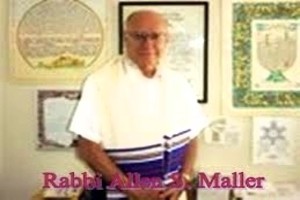 One of the best reasons for a Reform Rabbi to study the Qur'an, especially during Ramadan, is to gain additional insight into the wisdom of the Torah.

I first studied Islam when I was a student at UCLA almost 55 years ago, Then again, a couple of years later, while I was a student in a Reform Judaism Rabbinical school. Over the years I continued to read the Qur'an and other Islamic books.

Without realizing it, I was following a path first established by Abraham Geiger, one of the founders of Reform Judaism. Abraham Geiger was born to an orthodox Jewish family in Frankfurt, Germany in 1810.

In 1832, the University of Bonn's philosophy faculty held a competition for scholars. Georg Freytag, Geiger's professor in Oriental studies, urged Geiger to write and submit a paper about Jewish connections to Islam.

Geiger won the contest. His study was accepted by the University of Marburg as his thesis, and he was awarded a Doctorate. This thesis was published in German, and a generation later, translated into English as 'Judaism and Islam'.

Geiger was taught, and followed, the 19th century university's academic system of historical thinking; that something later was always derived from something earlier, even if one cannot find evidence of direct links. Thus he explained many parallels between Judaism and Islam by saying that Prophet Muhammad learned them from Jews living in Makka or Medina. This was wrong.

In the last two generations this kind of thinking has often been proven false. For example, agriculture was once thought to have originated in one place, and then spread world wide from there. Now, the overwhelming evidence is that agriculture arose independently at different times in several different places.

In the same way, people who believe there is only one God, should easily accept the idea that Divine inspiration has come; on many occasions, to many prophets, in many lands, in many forms and languages; without claiming that the later prophets had to be inspired by the teachings of the former prophets.

Thus, I can believe that the One God who inspired Moses and the other Prophets of Israel, also inspired Prophet Muhammad; and therefore I should expect that there will be many parallels between the Qur'an and the Hebrew Scriptures, and where they differ, the difference is not due to error in one or the other Sacred Scripture, but to different perspectives that God thought were appropriate to give to different communities.

I read the Qur'an, as the Prophet taught his followers to read the Torah, “not as a believer, and not as a disbeliever”. What does that mean?

The Qur'an, of course, is Sacred Scripture for Muslims. A disciple of Muhammad named  Abu Huraira relates, “The people of the Book used to read the Torah in Hebrew and then explain it in Arabic to the Muslims. Allah's Apostle said (to the Muslims). "Do not believe the people of the Book, nor disbelieve them, but say, 'We believe in Allah, and whatever is revealed to us, and whatever is revealed to you.' "

An example of the close connection between the Hebrew Jewish Scriptures and the Arabic Muslim Scriptures is the word Sakina/Shekinah. Sakinah is a very important word/concept in both Islamic and Jewish thought. In Islamic thought, it refers to the tranquility, serenity and peace of mind that results when a believer becomes totally aware of God's near by presence.

Although Sakinah dwells in the heart of one who is already a sensitive and faithful believer; it now comes to him or her directly from God's close presence and personal interest; to confirm and strengthen that believer's faith: as the Qur'an says “It is God who sent down tranquillity into the hearts of the believers, that they would increase in faith along with their (present) faith.” (48:4)

Thus, the experience of Sakinah is both God's gift of enhanced, confirming faith and the product of one's own faithfulness. (Qur'an 9:26 & 40) This is clearly stated in the example given in the Qur'an about Prophet Samuel's selection of Saul to be the first King of Israel:

“Their prophet (Samuel) said to them (The People of Israel), "Indeed, a sign of his (Saul's) kingship is that the chest (ark of the covenant) will come to you in which is Sakinah- assurance (Ghali translates; serenity) from your Lord, and a remnant of what the family of Moses and the family of Aaron had left (the ten commandments' stone tablets), carried by the angels. Indeed, in that is a sign for you, if you are believers." (2:248)

Indeed, this interactive connection between our faithfulness and God's Shekinah is described in Exodus 25; when God directs the People of Israel to build a sanctuary. But first God says, each person should make a voluntary offering: “The Lord said to Moses “Tell the Israelites to bring me an offering. You are to receive an offering for me, from everyone whose heart prompts them to give.“ (Exodus 25:1-2)

Six verses later God says,“Then have them make a sanctuary for me, and I will dwell (Shekanti) among them.” (25:8)  First humans choose to make a heart felt offering to God; then God chooses to dwell among, and within, faithful humans and their religious communities.

When God is well pleased by faithful people, God's gift of inner peace and reassurance is sent down to them. As it is written: “Certainly Allah was pleased with the believers when they pledged allegiance to you, (Muhammad), under the tree, and He knew what was in their hearts, so He sent down Sakinah (tranquillity) upon them and rewarded them with an imminent conquest”. (Qur'an 48:18)

The Sakinah can also dwell in a sacred object like the ark of the covenant or in a lowly bush (Qur'an 2:248). Those who are  truly “Blessed by the Lord...with the best gifts of the earth and its fulness, and the favor of Him who dwells in the bush”. (Deuteronomy 33:16)

The Sakinah can also dwell on or in a holy person; a saint, a sage. or a Prophet like Muhammad: “Allah sent down His Sakinah upon His Messenger and upon the believers, and imposed upon them the word of righteousness, and they were more deserving of it and worthy of it.( Qur'an 48: 26)

In the same way Prophet Musa's blessing of the twelve tribes of Israel is recorded in Deuteronomy 33 as a verb to indicate the Divine Human interaction. In verse 12 Moses says, “The beloved of the Lord Yishkon-dwells safely by Him; he encompasses him all day long, and Shakain--dwelling is between his shoulders (in his mind and heart).”

I believe the ambiguity of the pronouns in verse 12 is intentional. It is meant to stress the interactive reciprocity (Shekinah-Sakinah) between God, both as Lover and as Beloved, and God's faithful human lovers who also receive God's love; or as Prophet Solomon wrote, “ I am my Beloved's and my Beloved is mine.” (Song of Songs 6:3)

In our own generation, the word Sakina/Shekinah has been elucidated and expanded in parallel ways in both Muslim and Jewish thought; from the value of the personal experience of the Divine, to include and specify the importance of the feminine presence in our community.

Some Muslims have applied Sakinah to the importance of family calm and serenity. They stress the Prophets teachings about honoring wives as a way of attaining and sustaining family Sakinah. They expand mystical ideas found in Muyiddin ibn al-`Arabi (1165-1240) to today's stress filled world.

Some Jews have applied mystical teachings about the Shekinah from the thirteenth-century "Zohar, The Book of Radiance” to the metaphor of the feminine aspect of one of the many names of the Divine One. They seek to welcome women in greater numbers into traditional Jewish ritual and community activities.

Both developments show the continuing importance of Sakina/Shekinah to human life; and illustrate how faith in One God leads the various believers in different religions toward a common goal of religious respect for each other's communities; and a desire for religious harmony among all monotheistic religions.