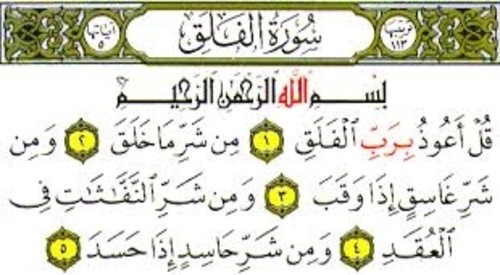 The Blessings of Surah Al-Falaq and Surah An-Nas

We learn from the hadith about the significance of both Surah Al-Falaq and Surah A-Naas. These two surahs are also referred to as “Mu’wadaitain”, which is an Arabic word that refers to the last two surahs of the Qur’aan. Prophet’s ahadith clearly tell us that these two surahs were revealed to seek protection from various types of evils. Ibn Al-Qayyim said that “the effectiveness of these surahs is great to repel magic, evil eye, and the rest of the evils and the need for a slave to seek Allah’s protection from these two surahs is greater than his need for self, eating, driking, and wearing dress” (Al-Fawwaid, 2/426).

Abu Saeed al-Khudri said: “The Messenger of Allah (S.A.W.S.) used to seek refuge with Allah from the jinn and from the evil eye until the Mu’wadaitain were revealed, and when they were revealed he started to recite them and not anything else” (narrated by al-Tirmidhi, 2058; he said it is hasan ghareeb. Also narrated by al-Nasaa’i, 5494; Ibn Maajah, 3511).

Aisha (RA) narrated that whenever Allah’s Apostle (S.A.W.S.) became sick, he would recite Surah Al-Falaq and Surah An-Nas and then blow his breath over his body. When he became seriously ill, I used to recite (these two Surahs) and rub his hands over his body for its blessings. [Narrarted by Saheeh Al-Bukhari: The Book of the Virtues of the Qur’aan, 5016]

Aisha (RA) also narrated that whenever Allah’s Apostle (S.A.W.S.) went to bed every night, he used to cup his hands together and blow over it after reciting Surah Al-Ikhlas, Surah Al-Falaq and Surah An-Nas, and then rub his hands over whatever parts of his body he was able to rub, starting with his head, face, and front of his body. He used to do that three times. [Narrated by Saheeh Al-Bukhari: Book of the Virtues of the Qur’aan, 5017]

In his Sahih, Muslim recorded on the authority of ‘Uqbah bin ‘Amir that the Messenger of Allah said, “Do you not see that there have been verses revealed to me tonight the like of which has not been seen before.They are (Surah Al-Falaq and Surah An-Naas).”

This Hadith was recorded by Ahmad, At-Tirmidhi and An-Nasa’i. At-Tirmidhi said, “Hasan Sahih.’’

Then the call was given to begin the prayer and the Messenger of Allah (S.A.W.S.) went forward (to lead the people), and he recited them in the prayer. Afterwards he passed by me and said, “What do you think, O ‘Uqayb! Recite these two Surahs whenever you go to sleep and whenever you get up.)’’ [An-Nasa’i and Abu Dawud both recorded this Hadith.]

An-Nasa’i recorded that Ibn ‘Abis Al-Juhani said that the prophet said to him, “O Ibn Abis! Shall I guide you to, or inform you, of the best thing that those who seek protection use for protection)” He replied, “Of course, O Messenger of Allah!’’ The prophet (S.A.W.S.) said,“Say: ‘I seek refuge with the Lord of Al-Falaq.’’ and “Say: ‘I seek refuge with the Lord of mankind.’” “These two Surahs” (are the best protection.)

2. “From the evil of what He has created,

3. “And from the evil of the darkening (night) as it comes with its darkness; (or the moon as it sets or goes away),

4. “And from the evil of those who practise witchcraft when they blow in the knots,

5. “And from the evil of the envier when he envies.”

4. “From the evil of the whisperer (devil who whispers evil in the hearts of men) who withdraws (from his whispering in one’s heart after one remembers Allah).

5. “Who whispers in the breasts of mankind.