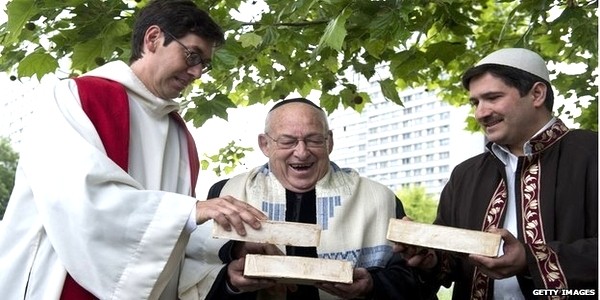 Why So Many Names for ONE God?


In the days of Abraham the people of Egypt and India had hundreds of gods, and hundreds of names for their gods.

For those religions that trace their prophets back to Prophet Abraham, and his two sons Ishmael and Isaac, the many names of God simply describe different aspects or attributes of the one God's multifaceted personality.

While each name is only one of the many appellations of the one universal creator of space and time; both Islam and Judaism also have one Divine name that is always in the believer's heart and soul.

Because the Jewish tradition reaches back more than thirty five centuries; it is not surprising that Jews have focused on additional names for God over those many centuries.

Yet, because all the many names of God call upon the same One God, it is also not surprising that many of the 99 beautiful names of God in Muslim tradition also appear in Jewish tradition, which sometimes refers to the 70 names of God (Midrash Shir HaShirim and Midrash Otiot Rabbi Akiba); and since Arabic and Hebrew are brother languages; in some cases the names even sound alike.


Most of the similarities between Jewish and Muslim names of God are not due to linguistics alone.  They reflect similar philosophical views of God's attributes.

However, since for more than twelve centuries, the only ongoing monotheistic religious community in the world existed within Israel, the Jewish People, God's universal attributes were frequently expressed in terms of His activity and relationship to Israel. For example, Elohei kol basar, the God of all flesh (Jeremiah 32:27) is usually referred to as Elohei Yisrael or Elohei of Abraham, Isaac, and Jacob (Exodus 3:15)

Of course, just as one parent can love, protect, and judge many children, the One God of Israel is also the one God of the whole world, So Ezra, the most narrowly focused of prophets, also refers to Elah Yisrael-God of Israel (Ezra 5:1) and Elah Sh'maya V'Arah- God of Heaven and Earth (Ezra 5:11).

Since Judaism is a close yet different religion from Islam, there are also several Jewish names for God's attributes that are not found among the 99 names that appear in the Qur'an.

The words El, Elah, Elohei and Elohim are all pre Abrahamic west Semitic generic terms for a God or for many Gods. In these various forms they appear almost 3,000 times in the Hebrew Bible.

But the most important name of the one God, the name God himself at the burning bush, tells Moses to tell to the children of Israel, is YHVH: which appears more than 6,800 times in the Hebrew Bible.

Ehyeh is the verb “to be” future tense singular and means I will/could/might/may be/become Who I may/could/will/might be/become i.e. Ehyeh is The God of Potentialities, The God of Possibilities, The Living God of Becoming and Transforming, the One who can liberate Israel from bondage in Egypt.

Unfortunately, the Greek and Latin translations of this verse were influenced by the Greek philosophical idea that God was similar to a permanent ideal form (like an equilateral triangle) or an unmoved mover and is not like a living personality.

Since they thought God must be a static unchanging being. they mistranslated “Ehyeh asher Ehyeh' as 'I am who I am' rather than its plain meaning of 'I can be whatever I should be to redeem you” i.e. God Almighty

When Jews speak of God in the third person, God's name is YHVH-- "the One who causes being and becoming, the One who brings potentials into existence." This name was spoken publicly from the time of Moses and throughout the centuries of the 1st Temple of Solomon, but it was replaced by Adonai (Lord) before the beginning of the 3rd c. B.C.E., because God's actual Holy name was eventually considered too holy to utter audibly.

In later centuries even the substitution was considered too holy to utter; and the custom among pious Jews till this day is not to use any name for God at all (except in prayer); but to say HaShem--the name (of God) when speaking about God.

One name of God that few Jews know or use is a name that I believe will become more important in the future as Jews and Muslims learn more about each other's religions. This name, El Ro'ee only appears twice in the Hebrew Bible and as far as I know is not used at all in the Talmud.

El Ro'ee is Abraham's wife Hagar’s name for God. El Ro'ee means A Reflective God or A God Who Sees Me. It also becomes the name for a well (Zamzum?).

“Then she (Hagar) called the name of the LORD who spoke to her El Ro'ee, 'You are a God who sees me'; for she said, 'Have I even remained alive here after seeing Him?' Therefore the well was called Beer-laHai-roee; the well of the Living One who sees me. Behold, it is between Kadesh and Bered. So Hagar bore Abram a son; and Abram called the name of his son, whom Hagar bore, Ishmael…” (Genesis 16:13-15)

Neither Sarah nor Hagar/Ha-jar are mentioned by name in the Qur'an, but the story of Ha-jar's exile from Abraham's home is traditionally understood to be referred to in a line from Ibrāhīm's prayer in the Qur'an (14:37): "I have settled some of my family in a barren valley near your Sacred House."

Muslim tradition relates that when Hā-jar ran out of water, and Ismā'īl, an infant at that time, began to die; Hā-jar panicked and ran between two nearby hills, Al-Safa and Al-Marwah repeatedly searching for water.

After her seventh run, Ismā'īl hit the ground with his heel and caused a miraculous well to spring out of the ground called Zamzum Well. It is located a few meters from the Kaaba in Mecca.

Perhaps this Torah name of God, El Ro'ee; which is Hagar’s name for God, which means A Reflective God or A God Who Sees Me, and the name for the Zamzum well-Beer-laHai-roi; the well of the Living One who sees me- can help bring Jews and Muslims closer together in the future.

That would be an excellent example of the power of God's name.